skip to main | skip to sidebar

Miguel, our Reality Tour guide, was a shanty town kid and is now a sociologist specialising in the politics and social circumstances of the poor people of Peru. He started up the ‘Reality Tour’ three years ago in order to tell the other story of Peru, the side of the country people don’t normally see or choose not to see. The story of the poor people and how they live day to day. We visit a stone mine in the outskirts of the city where many families work on a daily basis cutting and chipping out bricks for the house builders of the city. The volcanic stone is soft and therefore can only be worked by hand, not machine. Entire families, husband, wife and children as young as six work 12 hour days here making only 1 sole per brick (equivalent to 20p). It takes them 1 hour to make 1 brick so they manage to make only 12 soles a day (£2.40). They ‘hire’ part of the stone cliff face for 50 soles a year and it’s theirs to work, however they have to break away large chunks of the rock first which can be very dangerous as they have no safe tools. Miguel tells us that on several occasions he has made the decision to ‘kidnap’ children from the mine to send to the army. At first I am appalled at the thought of him taking these children away from their parents without their consent but, when he explains that in the army the children have the chance to learn many skills and that they want to leave the mine, I am a little more understanding. When they have completed their training, they can then find a better job and contribute to their parents again.
Miguel tells us that many Peruvians live on a ‘what I make today will feed me tomorrow’ way of surviving. We pass hoards of young men and women standing by the side of the road and he explains they are what’s called ‘daily workers’. They have no job but they come here every day to wait for work. Someone may need their house cleaning so they will stop by the side of the road and barter a price between the workers. One worker will offer 4 soles to clean, another will undercut and say 3 soles, so you can see, they are desperate and will work for virtually nothing. They are illegal workers who are adamant that their hard earned cash does not go to the state in taxes.
We continue to the shanty town where many mountain people live, who have been forced from their homes in the hills because of the threat of violence by terrorists. About twenty years ago there were many terrorists who targeted the mountain people, as they knew that these people had no say in the running of the country. The government simply forgot about the jungle and mountain dwellers, so when the terrorists offered them a voice, saying they would represent them and get justice for them, they greeted them with open arms. It was only when they started recruiting their children to train as terrorists, and would kill them if they refused, that the people began to realise it was not safe to stay there. They chose to move to the towns because there were more police and therefore a safer place for them to live.
One project which has proved a great success is the community soup kitchen and creche we visited. Widows from the mountains needed a place for their children to play while they looked for work in the city so they each contributed 20 soles and set up the creche which soon developed into a restaurant to feed the community. Every day the women journey to the markets in town to buy the produce (they have no refrigeration) to cook for the lunch. Children are fed first, then pregnant ladies and anyone with disabilities, then everyone else. It costs 2.50 soles for adults and 1.50 soles if you’re pregnant or disabled. They charge because, as Miguel explains, it’s not a good idea to give it out for free, and they merely want to break even, so any money they make goes directly to buy the food the next day. It is an example of a local community project which works and according to Miguel, this is the way people can help themselves out of poverty, on a local level. I try to ask about bigger organisations and whether I should donate to them, but he shoots me down saying they are not a good idea, as they don’t spend the money correctly. He believes the people need to do it themselves and prove they can to the rest of the world. If we give money in the wrong way, it will only be used for the wrong things, drink, drugs etc. I am a little confused but I’m very glad to have heard his viewpoint.
Posted by Laura at 16:14 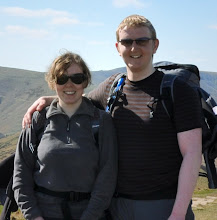